The first bow wave of the Beatles music reached Giora Feidman in 1964 while he was spending time in the USA. His intuition immediately told him, there was something very special about these boys, they would make it really big. How big, not even he could anticipate, of course, but „there was an incredible power in their music, and actually I‘ve been their fan from the very beginning.“ Giora Feidman at that point was 28, John Lennon 24 and Paul McCartney 22 years of age.

„I played some of their pieces every now and then, just not systematically as yet. But it‘s been kind of in the air, that I would do an entire album of Beatles-Songs some day. Insofar it now feels like a dream finally come true.“ 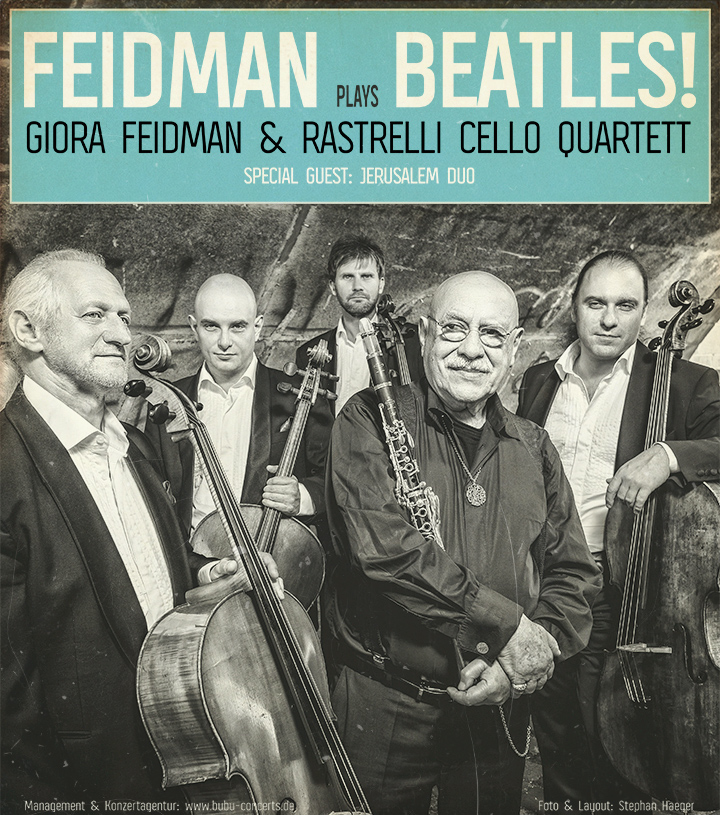 If you recall that the LP „Sgt. Pepper‘s Lonely Hearts Club Band” – even before phenomenons like „Hair“ and Woodstock – became a musical manifesto of a world wide movement of young people for a world wide togetherness instead of warfare, discrimination and exploitation, then you can‘t be surprised that those who created this album also inspired Giora Feidman, the untiring constructor of intercultural bridges. „What impressed me most about the Beatles and made them so enormously important to me, is the fact that they united practically the entire world. In their enthusiasm for the Beatles the youngsters of all continents were in agreement. Distinctions in religion and culture suddenly became meaningless. Even the wars their own parents had witnessed fell into the past. Rich or poor didn‘t matter any longer, even the generation gap disappeared by and by. No other artist, no other group before or after the Beatles has achieved this to the same degree. That was wonderful and touched my innermost. And it still keeps working. A new young generation has started to discover the Beatles for themselves. My grandson in Israel is eleven years old and plays the clarinet, too. He just asked me to bring two special Beatles books for him from my next trip to Germany. Isn‘t that far-out?“

Together with the Rastrelli Cello Quartet Feidman now brings selected Lennon/McCartney compositions to the chamber music level, and this approach is by no means handwavy. Already in 1965 the Beatles themselves used a string quartet and replenished it by one acoustic guitar only, which they applied just thriftily. That was in „Yesterday“, and as we all know, it turned out to become the most covered Pop song of all times. „On the other hand, with our listening experience of today, we can retrace quite clearly, how the Beatles had to work hard for their development from the simple Beat band – like there were thousands at that time – to the outstanding innovative Pop music ensemble“, explains cellist and co-arranger Kira Kraftzoff. „When they recorded ‚Eleonor Rigby‘ in 1966, the strings are played in a much too straight and tough manner to do justice to the empathetic and melancholic lyrics of the song. And on top of this Giora and us were in the situation to work completely without lyrics. All the emotion Paul McCartney packed into this song now has to be expressed by our instruments only. And therefor we arranged the strings a lot softer than the Beatles and George Henry Martin did way back then.”

When it comes to making inwardness audible on the outside, you can‘t find any clarinet player more gifted than Giora Feidman anyway. But humble as he is, under all circumstance he wants the laurel to be allocated fairly: „Without the four of the Rastrelli Quartet I would not have been able to do the album like I did. They had crucial part in it, especially in the choice of songs from the gigantic Beatles repertoire and almost exclusively in the arrangements. They brought the best out of me“. (Text: Mojo Mendiola)

The Jerusalem Duo from Israel - with Hila Ofek on harp and André Tsirlin on saxophone - will make the concert even more spectacular as ‘special guests’. Look forward to an unusual evening of music, with Giora Feidman at his most timeless and intergenerational.

Cookies make it easier for us to provide you with our services. With the usage of our services you permit us to use cookies.
Ok